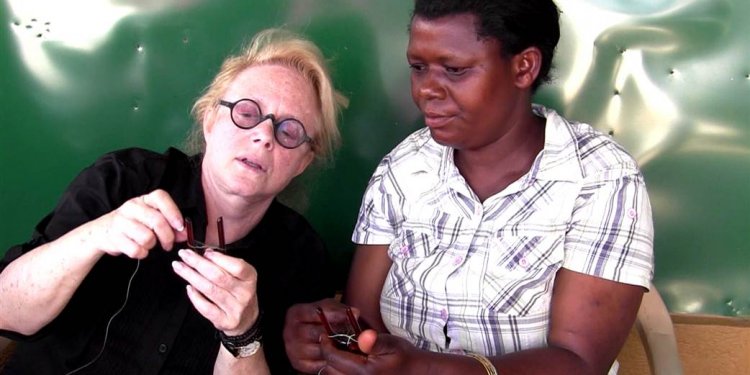 To be doing good deeds is mans most glorious task Sophocles

On my left wrist, looped three times and fastened with a loop and button embossed with “1GD, ” is a bracelet of 100 beads, each representing one anonymous good deed. On the bracelet is a moveable ring meant to mark your progress—for each completed deed, you move the ring one space until you’ve run out of bracelet; then you turn around, and work backwards—anonymously helping people one bead at a time.

My ring is on the third bead, representing my meager three deeds. When you receive your bracelet, along with a hand-signed note from the woman who made it, you are informed that simply making the purchase is Deed 1. You spend your $30 (or, if you’re wealthy and so inclined, your $475 for a bracelet of 100 amethyst beads), you receive a piece of jewelry, and help a woman in need of income from a decent job. A head start if you will—that was Deed 1.

The second was a folded note left in my favorite coffee shop, tucked underneath the corner of a lamp. It read You! Yes, you! on the outside, and on the inside it told the reader that they were special and loved. I don’t know if it was ever read, and if so by who, but that was Deed 2.

Deed 3 was buying blueberry scones for the office and placing them in the break room unnoticed. I have complicated feelings about this deed, as I ate several of the scones myself, but I didn’t eat them all, so I moved the ring accordingly.

The charity that hastens to proclaim its good deeds, ceases to be charity, and is only pride and ostentation William Hutton

That was weeks ago, and I haven’t done another deed since. Not because I haven’t wanted to, but because I’m flummoxed by the anonymity portion of the agreement. I want to help people—I give money to the homeless, I research the charities I give to so I know they’re legitimate, I try to help the people I know when they’re in need—but the anonymity aspect makes it harder to help.

And what is anonymity?

Is it facelessness? Does it require a mask and a cape? Is it namelessness? As long as I’m a stranger to the person I help, can I shift the ring one bead along the line?

Does that count as playing by the rules of the game? It did begin as a game—Thomas Morgan made it up with his daughter. 100 Good Deeds, each of them anonymous, something for himself and his daughter, now a part of this bracelet I wear.

If you wish others to know about your good deeds, they are not truly good deeds Master Hsuan Hua

What does anonymity give that being personable cannot? It removes the ego of the deed-doer, but then again, the deed can always be related to others, and even if not, it can be enjoyed privately—even shudderingly smugly. There is no such thing as removing the ego, it seems. If you do something good for others, you can expect good feelings to return to you.

Is it not a good deed in itself to become familiar with someone after having done him or her some sort of favor? To develop some sort of rapport, exchange names, become friendly? This is one point upon which me and the bracelet do not necessarily agree—but I will abide by the rules of anonymity, whatever that may be.

(of a person) not identified by name; of unknown name

We are not saved by good deeds; we are saved for good deeds Dillon Burroughs

The reason why I bought the bracelet, though, was to help women in need. Each bracelet is made by a woman in an economically trying country, city, or neighborhood, and provides them with a safe and potentially meaningful way to bring income.

There are 19 women in Kampala, Uganda; 24 women in Johannesburg, South Africa; 41 women in Lusaka, Zambia; 21 women in Kigali, Rwanda; nine women in Port-Au-Prince, Haiti; 20 women in Bali, Indonesia; 23 women in Pune, India; and seven men and women in Harlem, NY.

I was surprised by Harlem, especially since it seems to be becoming the new Brooklyn, but I reserve judgment, especially since that leaves 157 women (out of millions) in developing countries whose efforts are being rewarded by the purchases of white girls with good intentions. But is it enough to make a difference?

“It made a difference to that one.”

And how much of a difference does it make in the lives of those who have purchased the bracelet? How many men and women actually do their 100 good deeds?

I was inspired to purchase mine after seeing a friend showcase hers proudly on Twitter. Through her, I learned that the proceeds went toward improving the lives of vulnerable women in developing areas, that making these bracelets was a way of empowering these women, of helping them to avoid more unsavory (I assume) career choices.

She has done four deeds, beating my three by only one. That’s the only metric I have to judge by, and any scientist would say that a sample size of two isn’t acceptable. Then again, there are so many celebrity endorsers of these bracelets (Naomi Watts, Susan Sarandon, Mila Kunis, Rosie O’Donnell, Katie Holmes, Cyndi Lauper, Keb Mo) who are in better positions to do anonymous good deeds, at least financially, so perhaps it evens out. Unless these bracelets were purchased by or promoted by a publicist, and it sits on the wrist of one famous person or another as a nice bit of PR rather than a commitment to a cause or philosophy. Or perhaps these celebrities truly care about “voting with their dollars” to inspire change in the lives of the bracelet makers, but they wear the jewelry without doing the deeds.