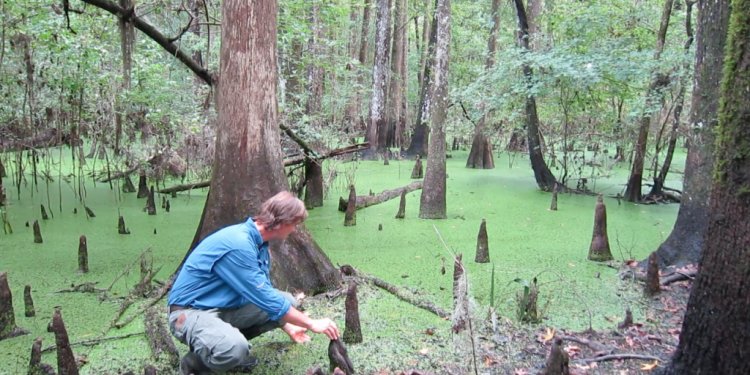 Betty Ann Weber’s neighborhood pond is normally populated with swans and other waterfowl. Today, there were none.

Weber, who is a longtime resident of the area, said she’s mortified that there’s oil in her neighborhood’s duck pond. She’s worried that pollution will drive out the wildlife that Duckpond Neighborhood residents have enjoyed seeing for years.

“There were otters here too… and fish, ” Weber said. “Somebody had to put [the oil] here. It doesn’t just grow here.”

Neighbors noticed the slick on the pond after Monday’s heavy rain.

Alachua County’s Environmental Protection Department wasn’t notified of the oil until days after its discovery. However, when officials went to inspect the pond, they said it wasn’t as bad as residents made it seem.

Sweetwater Branch was once a naturally flowing creek, but that’s no longer the case. A dam created the duck pond, and many of the birds are now domesticated.

Commercial developments and residential homes popped up along the creek, and, although the pond is nice to look at, it’s the cumulative human activity that’s causing the pollution.

“I think a lot of residents and visitors that walk around there see this very attractive wildlife, and it looks like a naturally flowing creek, but it’s been severely altered by a lot of the land development and road construction, ” Bird said. “If there’s oil on the street, when it rains, it’s going to wash into the duck pond.”

Storm water basins collect all of the untreated water and pollutants that rain washes into the area’s curbside drains or directly into Sweetwater Branch.

“You could have that type of situation after every big rain, ” he said.

The runoff can include anything from the pesticides and fertilizers used on people’s yards, gasoline people might have spilled while fueling their lawn mower, or even pet waste.

“We do know a very small amount of petroleum like gasoline, or oil, or diesel fuel will create a very visible sheen. It doesn’t take a lot, ” he said. “Once it gets on the water, it pancakes out very thin. A small amount can create a significant slick.”

When the storm water system connects hundreds of private homes, it all adds up. Officials say pollution comes with the territory. They don’t know the source of this particular oil, but they are testing samples of it to find out what kind it may be.

As it looks right now, officials say the birds should be fine. The county placed “absorbent socks” in the water to soak up the oil and other contaminants.

Officials haven’t noticed any fish killings. However, that doesn’t mean conditions weren’t bad before it was brought to their attention and that pollution won’t be worse in the future.

The county is proposing new storm water standards to reduce pollution so that water will be somewhat filtered before reaching the creek. They’ll continue to monitor the pond, but now the only thing left to do is wait for the pollution to naturally dissipate.

Though the oil is being absorbed, lack of awareness of the causes of pollution is still a problem. However, there are ways that residents can help.

In an age where there are more synthetic chemicals than ever, the department suggests being mindful of the products that residents choose.