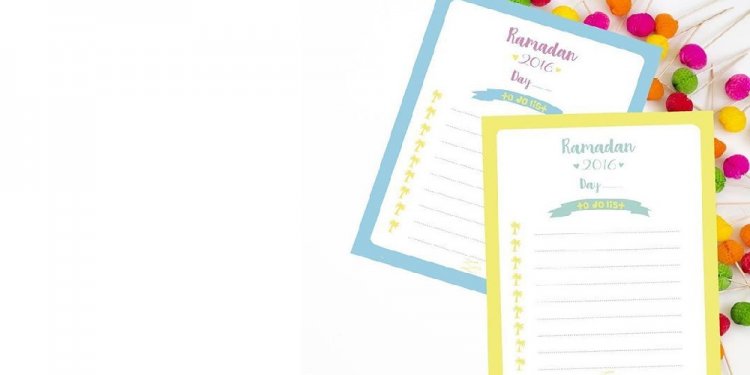 Two years ago, prior to a sweltering Ramadan, I made a list of all the things I was going to complete. However, by the tenth day, I was be depleted of my imaan boost. After ‘Eid al-Fitr, I looked over my list.

But they seem so easy to accomplish… what went wrong?

I believe the problem was that I aspired to reach so many goals in such a short amount of time without really thinking about the reality of Ramadan. I told myself the deeds & goals I was aspiring to do had to be huge, go big or go home kind of good deeds. I didn’t see the strength in a simple Asalaamu’alaikum wa rahmatullahi wa baraktuh to my sister on the street or holding the elevator door for someone.

This year, I decided to change things up.
With the help of the Ramadan calendar and the help of Allah ﷻ, I created one good deed per day to strive for. If you are the way I was, just remember that all good deeds — no matter how big or small — all multiplied seventy times during the month of Ramadaan, subhan’Allah.

Without further ado, here is the list of thirty good deeds — each for one day of Ramadan — with ahadith and/or ayaats from the Qur’an.

1st: Smile! Alhamdulillah, we have made it to another Ramadan!

“When you smile to your brother’s face, it is charity.” — Prophet Muhammad ﷺ

2nd: Help your family with chores around the house.
“Cleanliness is half of faith.” — Prophet Muhammad ﷺ

6th: Recite the Qur’an. It may be difficult for some & easier for others. For a revert like myself, the recitation of the Qur’an is almost scary due to the idea that our tajweed is not perfected. However…
‘Aishah (May Allah be pleased with her) reported: The Messenger of Allah ﷺ said, “The one who is proficient in the recitation of the Qur’an will be with the honourable and obedient scribes (angels) and he who recites the Qur’an and finds it difficult to recite, doing his best to recite it in the best way possible, will have a double reward.” [Al-Bukhari and Muslim || Book 9, Hadith 994]

8th: Donate to a charity of your choosing!
“Spend (in charity) out of We have bestowed for their sustenance secretly and openly ; and turn off evil with good: for such there is the final attainment of the (Eternal) Home.” — The Holy Qur’an [13:22]

9th: Revive a Sunnah!
“Verily, whoever revives a tradition (sunnah) from among my traditions which has died after me, then he will have a reward similar to whoever acts upon it without taking anything away from their rewards.” — Prophet Muhammad ﷺ

10th: Feed a fasting person.
“Whoever feeds the person who is breaking his fast, he will have his reward (for his fasting) without decreasing anything from the reward of the fasting person.” — Prophet Muhammad ﷺ

11th: Spend time with your younger siblings. To you, you’re just one person in the world. To them, you are the world. Teach them to pray, read Qur’an with them, give them all your attention. They’ll remember these times and be grateful for them.

12th: Show your kindness to everyone, including animals. Simply giving a few birds a piece of bread or a thirsty dog some water will benefit you!
“Whoever is merciful even to a sparrow, Allah will be merciful to him on the Day of Judgment.” — Prophet Muhammad ﷺ

13th: Spend your day solely in remembrance of Allah. Find a quiet place (your room, the masjid, sitting under a tree, etc.) and remember Allah and all He has done for you.
“So remember Me, and I shall remember you; and be grateful unto Me, and deny Me not.” — The Holy Qur’an [2:152]

14th: Invite a friend to the masjid for prayer. Ramadaan is the month where those who never prayed may start praying; however, they may fear ridicule and be labeled as a ‘Ramadan Muslim.’ Invite them & be kind.
A man asked Sheikh Muhammad al Ghazali:
“What is the ruling of a person who doesn’t pray?”
‎He said:
‎“The ruling is that you take him with you to the Masjid.”

15th: Share your knowledge! Each day we learn something good or some new deed. If we share this with others, we will get the same reward.
“Whoever guides [another] to a good deed will get a reward similar to the one who performs it.” — Prophet Muhammad ﷺ

16th: Visit your grandparents! It is such a blessing to have grandparents. Give them a visit to show you love and care about them. It will mean the world to them!
“Whoever wishes that his provision be increased and his age lengthened, let him maintain the ties of kinship.” — Prophet Muhammad ﷺ

17th: Forgive others and, most importantly, yourself. It may be incredibly difficult, but the reward is immense. After all, “do you not wish that Allah should forgive you? (The Holy Qur’an [24:22]). If your Lord could forgive you for your previous sins, forgive yourself. It will take so much off of your shoulders.
“Whoever does not show mercy will not be shown mercy.” — Prophet Muhammad ﷺ

18th: Pay it forward! A selfless act shows compassion, love, and above all: that you are making a difference in this worldly life. With these acts, there’s no doubt you might make someone’s day.
“Never will you attain righteousness until you spend (give) from that which you love. And whatever you spend (give), indeed Allaah is Knowing of it.” — The Holy Qur’an [3:92]

19th: Help keep your environment clean! Removing litter from the Earth that Allah has created will surely benefit you.
“Removing harmful things from the road is an act of charity (sadaqah).” — Prophet Muhammad ﷺ

20th: Learn one name of Allah and invoke Him with it. Al-Asma-ul-Husna are the 99 Most Beautiful Names and Attributes of Allah.
“Allah has ninety-nine names, i.e. one-hundred minus one, and whoever knows them will go to Paradise.” — Prophet Muhammad ﷺ