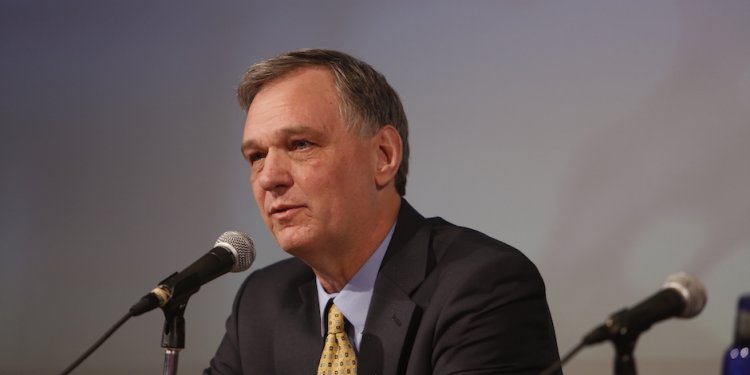 Pennsylvania Department of Environmental Protection (DEP) Secretary John Quigley talks to Tribune-Review staff about the upcoming year for the DEP at the Trib offices on the North Shore, Thursday, April 28, 2016.

The state's short-serving but long-besieged environmental protection secretary resigned Friday amid questions about an email he sent from a private email account to advocacy groups, though issues had existed for some time, said lawmakers and a source close to the governor's administration.

John Quigley was in Pittsburgh on Thursday, meeting with the Allegheny Conference on Community Development, and he used his Twitter account to disseminate DEP-related news as late as Friday morning.

The Tribune-Review could not reach Quigley for comment about his resignation.

Gov. Tom Wolf tapped him for the job last year.

Wolf's office did not divulge why Quigley quit, although the administration did say that it was looking into an email Quigley had sent this spring. No details were provided.

The Philadelphia Inquirer cited a source who said Quigley's email to environmental groups bemoaned the Legislature's failure to approve changes to state oil and gas drilling regulations he championed and delays in changing clean-air regulations.

“The unfortunate level of discourse with Quigley is illustrated by his determined refusal to correct known typographical errors in pending regulations, ” said Maher, chair of the House Environmental Resources and Energy Committee. “The upbeat message would be Quigley's departure creates an opportunity for the administration to improve its efforts for environmental protection.”

“Secretary Quigley demonstrated poor judgment and a clear inability to work with legislators to advance the governor's environmental agenda, ” Yudichak said in a statement.

Quigley led the DEP as acting secretary since January 2015. He received Senate confirmation in June.

Lawmakers scrutinized Quigley soon after Wolf picked him. Critics parsed statements he had made on his environmental blog while working as a consultant.