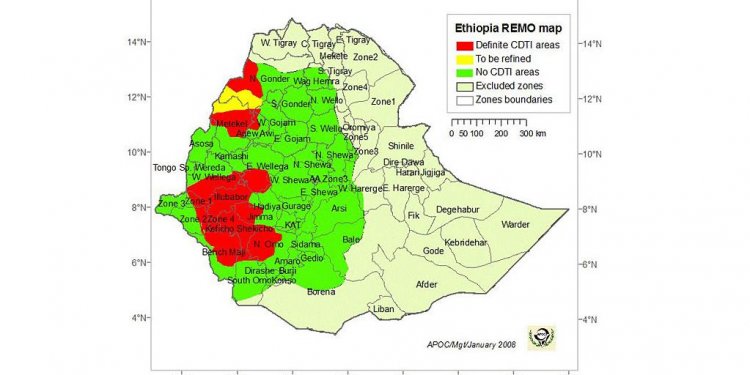 The Green World Campaign planted approximately 100, 000 trees in pilot programs Ethiopia in 2008. This included a calliandra and gravillia tree project in collaboration with Greener Ethiopia in the Gurage Zone, and a combined reforestation/agroforestry project with MELCA in the Menegasha Suba forest.

MELCA is a principal GWC partner in Ethiopia. It grew out of the African Biodiversity Network (ABN) in 2004, led by a group of environmental practitioners and lawyers. The organization arose out of their shared concern about the destruction of fragile forests, watershed ecosystems, and biodiversity (Ethiopia is is one of the 12 so-called Vavilov centers for crop genetics and biodiversity on the planet).

It works by empowering local communities, elders, schools and youth in the Sheka Forest region in southeast Ethiopia, the Bale Mountains National Park, and Menagesha Suba forest near to Addis Ababa. The word melca means ‘ford’ in the Amharic and Oromo languages. It is a crossing point on a river, and is used symbolically to indicate the need to take people to a greater understanding and appreciation of traditional ecological knowledge along with the most up-to-date scientific data.

MELCA is led by the renowned environmental activist Dr. Tewolde Birhan Gebre Egziabher, General Manager of the Environmental Protection Authority of Ethiopia and winner of the Right Livelihood Award. (also called the Alternative Nobel Prize). The board chairman is Dr. Melaku Werede who also won the Right Livelihood Award, and started the first plant gene bank on the African continent. There is an executive office led by the director, Million Belay, an ecological activist well-known in Africa and abroad,

The organization is a regional hub of the African Biodiversity Network, and is influential in Ethiopia and neighboring countries. It is anticipated MELCA will assist the GWC to expand throughout the region.

MELCA works for the revival and enhancement of traditional ecological knowledge and protections of the rights of indigenous Ethiopian communities. This involves research on policies, legislation, and initiatives that affect culture and ecology; advocacy and campaigning on community rights and the safeguarding of traditional ecological knowledge; capacity building and in-depth training through experiential learning to educate youth and other change agents; and raising public awareness on culture, biodiversity and development issues, including public cultural celebrations.

Reforestation of denuded, eroded hillsideOne elder said “Why do we cooperate only to bury the dead body of human being? Why not we also cooperate to save our ecosystem by planting new trees and “new life” to appear in our village”. On this basic idea, the local community sincerely discussed on the raised issues and agreed up on rehabilitating their localities by planting indigenous tree that were very common in their village.

In the Sheka Forest, MELCA works with the Sheko people, who have a millennia-old system of sustainable wild honey and coffee gathering. The people are the natural stewards of this territory, which MELCA has mapped using GPS to document sacred sites, traditional agroforestry areas, and wildlife habitat. It also runs programs in which elders take young people on forest retreats and teach them ancient knowledge. The young people then work within their schools to further cultural and ecological goals, including growing seedlings and distributing them to villages (the program is now in 30 schools in Southern Ethiopia).