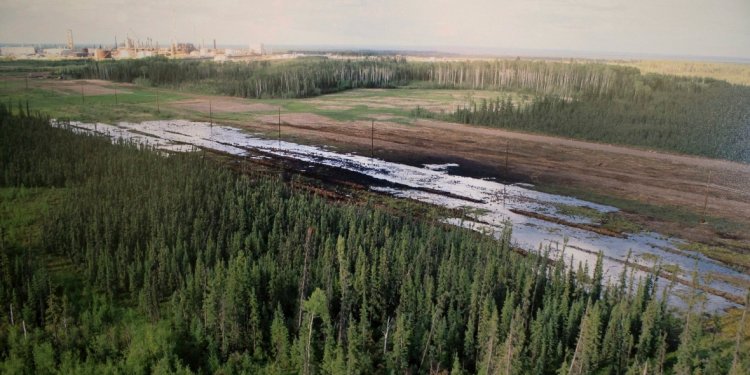 Alberta's energy regulator has issued an environmental protection order after a massive pipeline spill in the northern part of the province earlier this week.

The order directs Nexen Energy to contain the spill, which saw five million litres of bitumen, sand and water released at the company's Long Lake oilsands facility near Fort McMurray.

It also instructs Nexen to alert affected parties and develop a cleanup plan.

In a public apology issued Friday, the Calgary-based company said that the spill had already been contained and was in the process of being cleaned up.

The energy regulator is now investigating the spill, which was discovered by a contractor Wednesday. It is not known how long the leak had been ongoing before it was found. Nexen said the warning system for a pipeline installed last year failed to detect a break.

"We are deeply concerned with this, " said Ron Bailey, Nexen's senior vice-president of Canadian operations. "We sincerely apologize for the impact this had caused."

The material leaked through what Bailey says was a "visible burst" in the pipeline, a double-walled, high-pressure line installed in 2014. Bailey said the line was shut down immediately after the leak was discovered.

The detection system did not work in this case, so it isn't known how long the substance was leaking. A contractor walking along the pipeline discovered the spill.

"This is a modern pipeline, " Bailey said. "We have pipeline integrity equipment, some very good equipment, " he said. "Our investigation is looking through exactly why that wasn't alerting us earlier."

The spill covers an area of about 16, 000 square metres, the size of approximately two CFL football fields. Bailey said it is mostly contained within the pipeline's immediate area.

The area can only be reached by a winter access road, so the company had to build a road into the site. Bailey said vacuuming of the oil started Friday. The site is contained by berms and other abatement equipment.

Bailey declined to name the company that manufactured the pipeline.

Despite the scope of the incident, Alberta Premier Rachel Notley said pipelines are still the best way to transport oil and gas.

"For instance, in Quebec, they know full well that rail is much more problematic a transportation method, " Notley told CBC's Edmonton AM on Friday.

"Even within this unfortunate accident, which I'm troubled by."

This photo shows the location of the spill relative to the oilsands facility. (Terry Reith/CBC)

Notley is attending the Council of the Federation meeting in St. John's, where premiers agreed to a national energy strategy.

She said her government is getting regular updates about the spill.

"We'll be doing an investigation into what went wrong and what happened with respect to how long the leak was in place and whether everything was done to catch it as soon as it could be, as well as to prevent it at the outset, " she said.

"Unfortunately, there's nothing we can say except that we are going to learn from this."

First Nations groups in northern Alberta are calling for tighter environmental regulations on pipelines, saying they are concerned that more spills will happen in the future.

A spokesman for the ACFN said a spill this big will have an "extremely serious" impact on the muskeg, which is a source of aboriginal medicines, berries and wild game.